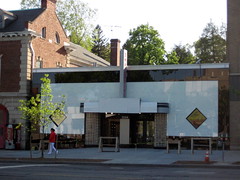 Mid-Atlantic Commercial Properties, a division of Fort Lauderdale-based Morgan Property Group, redeveloped the property for longtime owners, the Lung family, who closed the restaurant in 2007 and leased the building to Walgreens. Yenching Palace is the secret location where President John F. Kennedy’s negotiators met with representatives of the Soviet Union in 1962 to prevent a war during the Cuban Missile Crisis. Also at Yenching Palace, Richard Nixon’s Secretary of State, Henry Kissinger, discussed better relations with the Chinese. After that, Yenching Palace became a popular restaurant among the diplomatic community. Kissinger dined there regularly.

Can Tenants Going South Be Turned Around?
Finding zoning for your building
Property Tax Appeals